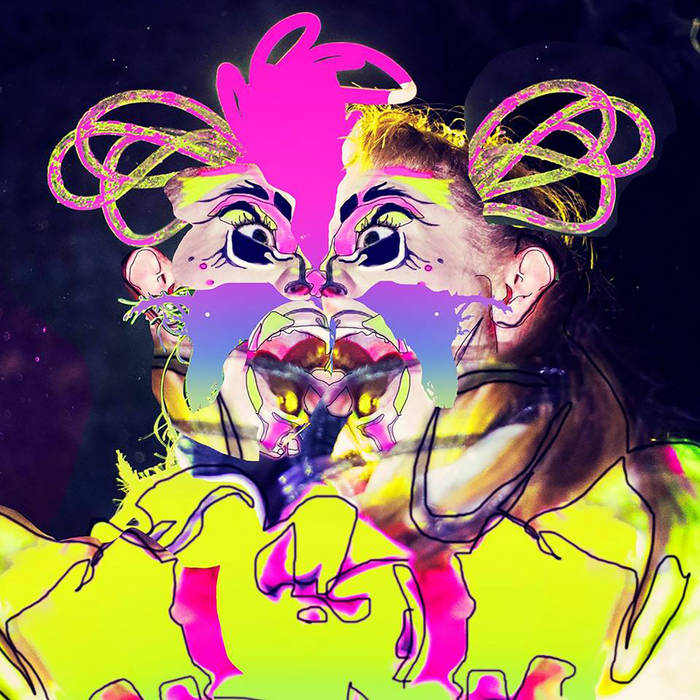 frontpack Reminds me of Pharmakon, except with a beat so a little easier to find opportunities to play it :-D. Favorite track: Charge.

inga there is nothing like it! industrial love making ♥ Favorite track: XLR.

Rarely does a debut release come with such a powerful impact as this, the self titled recording by AJA.

Maximal in approach, AJA deploys rhythmic noise, bomb heavy drum machine, convolving vocal utterance and a dedicated hell-scape of field recordings, abrupt sound design and blistering drone. These recordings feel expelled rather than composed, a lashing of energy captured. The unhinged nature of her recorded work is complimented in what are soon becoming legendary live performances wherein the AJA experience is fully realised.

As a collaborator with designer LU LA LOOP, AJA’s sounds have bruised the runway of Berlin Alternative Fashion Week. Her work within the LGBTQ community running workshops in sound art and as an advocate of promoting and increasing the presence of women in electronic music, has seen her work carry throughout Europe and more recently to Brazil. It is in within the context of transgressive art, sexual identity/ politic and grass roots teaching that AJA’s work is elevated into a neo-punk.

The self-titled Opal Tapes release opens with the swaggering, drunken lurch of “Rattles”. Claustrophobically building toward release but never achieving, AJA’s voice dominates the track in an almost wordless epiphany which is re-digested by digital bacterium. “Charge” resonates in golden tone as pylon-heavy drones fry away above, the beat, still present; remains leaden, dragging it’s weight forward. “Sweat Pearls” is arrhythmic and paranoid, stuttering kick patterns charge out draped in psychotic wailing. The A side closes out with “XLR”, a mixed resolution of glorious sound design, crunching and clunking like ancient calculators while AJA’s voice soars above.

“Tuck It, Tape It” offers minute respite before the immense energy of the B side begins it’s mission to excoriate. Breathlessly oscillating between high speed industrial ache and rubbered up cleaving, the track pushes toward palpitating levels of intensity. “Black Stain” gutturally digests to follow up, textured vocals push rich drones along while grim MS-20 sits low and stern rumbling the track forward. High energy reigns back in for closer “Marbles”. A seven minute flex over a delicate ambient backdrop which climbs up and over into a full on trance denial.

AJA is cementing her place at the front of confrontational, psycho-visceral, truly new music. Opal Tapes are enormously proud to work with her on this full debut release. Her previous work can be heard on Perc’s album “Bitter Music” (track title “Spit”) and on the recent Opal Tapes compilation “The Harvest Of A Quiet Eye”.

THE HORN OF PLENTY

IF YOU WOULD LIKE YOUR ITEMS TRACKED OR SENT VIA RECORDED/SIGNED DELIVERY THEN PLEASE EMAIL SR.BISHOP52@GMAIL.COM BEFORE ORDERING. ANY ITEMS LOST, DAMAGED OR STOLEN WHILE IN TRANSIT CANNOT BE ACCOUNTED FOR BY THE LABEL *** ... more