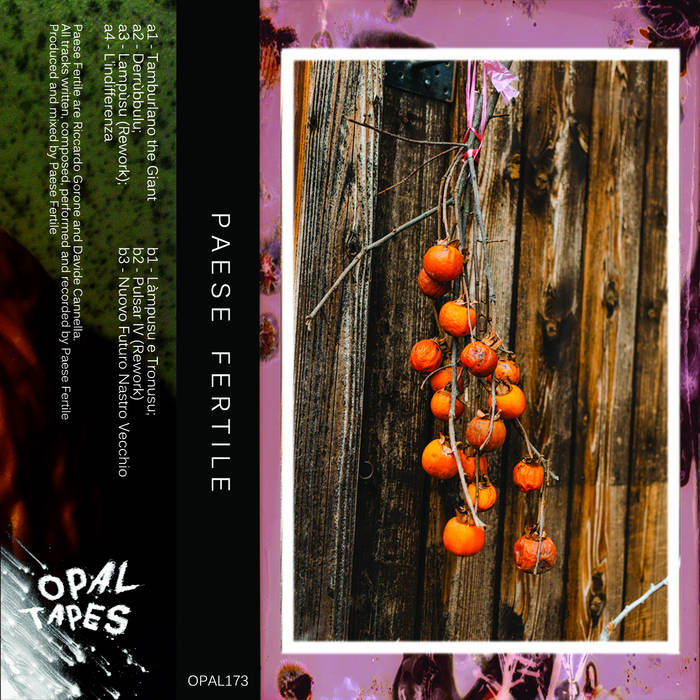 The duo of Riccardo Gorone and Davide Cannella comprise P A E S E F E R T I L E, a group whose vision for verdant electro-acoustic music is rivalled only by their shared fascination in the decomposition and rotting of sound.

Gorone primarily works as a mix engineer with members of Tangerine Dream, Henry Cow, King Crimson and Tuxedomoon being previous clients. Cannella is a drummer and instrumentalist formerly known as 'Wesqk Coast'. With P F their interests in Italian folklore, linguistics and the attribution of sonic aesthetics to social, mythical and physical properties are explored to incredible success.

Opening piece 'Tamburlano the Giant' ideates a "vast metallic gizmo" and the possibilities such an instrument would offer. Spring reverbs glisten as increasingly frantic drum patterns and synth volleys expand through it's circuitry an coils. The music is as patient as it's intense allowing space and time to build and create against the hum of internal workings.

The hauntingly empty 'Derrùbbulu;' follows wherein metronomic pulses slowly creep into a dimly lit zone of tape grit and torch-light synth pads. The reverb tank again is awakened with roughly handled abandon, pushing into ultra-tactile noise and EAI. 'Lampùsu (Rework);' is a visionary track of tape-transported psychedelia finding it's body wrapping like a Liana around a devestating elongated gabba kick-bend bass line. It's both ultra-modern and resolutely retro in feel, an IDM for moss and branches not silica.

'L’indifferenza' proffers a modal take on heavens soundtrack. Synthetic plucks smattering the listening field in a maximal mediatation on the edge, between world and language. 'Nuovo Futuro Nastro Vecchio' closes the album with an experimental masterpiece of hand-clapped rhythm, occult phenomenon audio recordings, proto-dub, afro-futurism and chiming ambient. Near impossible to adequatley describe, as is the case with so much of this really unique album. Enormously musical in a way which highly conceptual music is so rarely executed today.