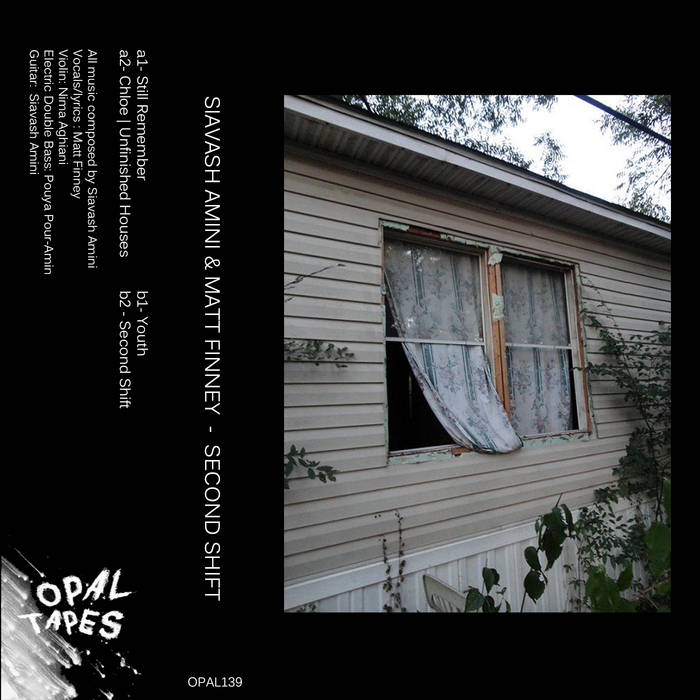 Enormously affecting concrete/electro-acoustic pieces constructed by Siavash Amini, utilising stringed instrumentation, synthesis and what seems to be a microphone linked directly to both heaven and hell. Amini's music is dotted with the excoriating spoken word of Matt Finney, who's writing and voice link directly to the awkward, oft destructive memories of puberty and the odd shape of love as a teenager. Impossible to explain but very important to experience, Second Shift follows Gospel (on Opal Tapes, Vanilla) as the second and perhaps ultimate issue of this duo's truly new music

"The best times of my youth were spent in the backseats of my friend's cars that they inherited from their older siblings. They were pieces of shit but none of us had to go home so that evened it out. Things weren't great where I was living and I'd try to only be there when I had to go to sleep. I was with my first serious girlfriend and life was hell for her too. We were like two stray dogs who finally found a home in each other. I was stupid enough to think it would last but that was what was running through my mind when I wrote this album. The older I get the more hazy these times become but there's always that flash of memory and I'm right back there. I had hair, I had a stupid chinstrap beard and I was obsessed with Glassjaw but I'm there again.

The idea came almost immediately after me and Siavash recorded Familial Rot. People responded to that album in a way that neither of us was expecting. I'd found a true friend in him and we started to run with this idea of telling the complete story of what happens to the couple on Familial Rot. I blur the details and protect whoever has had the misfortune of knowing me but for the most part it's all true. The idea of dropping into the present on FR and then showing what all came before it on Second Shift was an intriguing idea and I don't think this could've worked with anyone else but Siavash. To say he is a genius is an understatement and it's not everyday someone asks if you can send them some porn you watched in high school so they can sample it for a record.

Second Shift was our second album and planned to be released about 2 years ago but no one gives a shit about plans. It kind of worked in our favor since we ended up on this fantastic label and also put out Gospel for us. Gospel was originally part 3 in our series but I think it worked in our favor. Towards the end of that record some of the characters that are on Second Shift are mentioned. Loose ends were being tied up. We've covered the present on FR, we covered childhood on Gospel and on Second Shift we're focusing on being young. Dead end jobs, trailer parks, fucking in Honda Civics or sneaking into a construction site to finger a girl in a house that's still being built. Being lost in this world and revelling in it. Fuck the future. We weren't planning on making it that far.

The only thing that's left to cover is old age and, knowing how me and Siavash, it's probably not gonna end well. I hope it's not the last album we make together but if it is then so be it. I'm so incredibly proud of what we've done together and I'm proud that they've found such a good home here at this label. Thank you for reading and for listening. I'm not getting any younger but I do like to think back on my friends chanting the words to hardcore songs and dancing in empty parking lots like idiots and loving it with all I had. I don't remember all the details but the things that I do seem like they were all that mattered. I'd like to feel that way again."