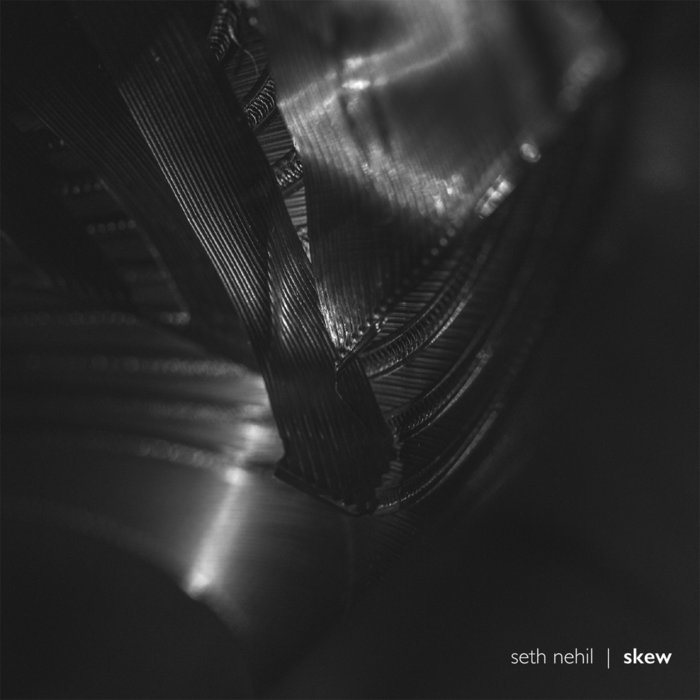 Comprised of two EP's on one CD/digital release. Skew / Flume marks a continuation of the long-standing work of American sound artist Seth Nehil.

Works such as 2009's 'Anemonic Site' (Alluvial Recordings) and 'Flock & Tumble' (Sonoris) show the density of earlier works breaking down into granular states and clusters of activity punched through with percussive aspects drawn from New Complexity and nature itself. Where electricity paints a straight and unbreaking line Seth wills the microphone and computer to deform and fracture, bending linearity and instead creating the illusions of natural activity through careful and considered composition.

"Skew opens with its title track, there’s this edgy collision where a delusional set of broken voice samples (courtesy: Katy Kanfer) – a juncture in which the rubber hits the road. Almost literally in terms of the visceral and dimensional sounds he’s producing here, and that continues into the raw stint which is deliciously elastic and punctuated by percussive bleeps. The deer-in-the-headlights is let loose in something altogether magically mysterious. These sound like sound effects from one of those rare new wave albums that surfaced forty years later, but gone through some sort of electro-acoustic treatment including amplified microsounds (rain, scratching, and jittery interludes).

Is it hail or is it a spray paint can being jostled about, or is it simply electro-static of some sort? Nehil has created many collaborations over the years, but seems most fortified on his own. His unexpected altercations with tiny objects blended with sonic effects are out of this world, figuratively (and conceptually). In his actions (veer, strew and warp) the ‘collected chaos’ may be simple actions (or not…I was not there) but are presented like ecstatic shockwaves that rumble into shadows and shaded radiance. And though the pieces on this first EP are fairly short in length (all four mins or under) they leave an impression as if you have incurred a live performance in your head that offer a lasting impression many minutes after.

2017’s Flume includes three longer pieces, beginning with its title work. The pairing of these two EPs now makes sense, especially after the initial haunting minutes lost in industrial drone. With a single snare Nehil bores a passage via deeply driven formless waves that circulate hypnotically. The duality of weightlessness to heavy drone is in strange harmonic opposition, a profile that is balanced by the epic low-foaming ambient din. In a moment the listener is blasting into the nether regions of space, and yet as elusive as that seems, I’m also experiencing the aeration, not dissimilar to the pitch of an Italian espresso machine.

I can’t help thinking this could potentially be Nehil’s nod to the recent 50th anniversary of NASA’s moon landing, at its most rickety – nuts and bolts being jostled as engines blast at light speed parallel to the Earth’s axis, breaking the speak of light in a mad mission to break previous norms. However, I do not see this work as a sentimental tribute, not one iota. It only pricks that DNA from the inside-out. In fact, knowing the artist’s collaborations with dancers this seems more akin to understanding the fluidity of bodies in movement, in space. His deployment of static, both near and far, as electric and as ephemeral, seem not only on point, but at times imposing. The leatherette-like cover by photographer Harrison Higgs only emboldens the whole ‘man-made rough-trade’ aspect of this surprisingly fleshy record.

The closer Cleft is telekinetic in construct, yet has this visceral ambiguity about it. By combining the glassy synths of 70’s sci-fi cult classic film soundtracks with a dynamic set of scaling, diacritical markings and bloated effects it becomes a double take. It’s lurid and dank, unlike anything in his discography, leaving you hanging in a suspended sense of wait. Think about the rings of Saturn, slightly teetering, pendulous, in the darkest cosmos — and then simply add transmissions an untapped species from a far-off galaxy that are nearly impossible to decode by human means."