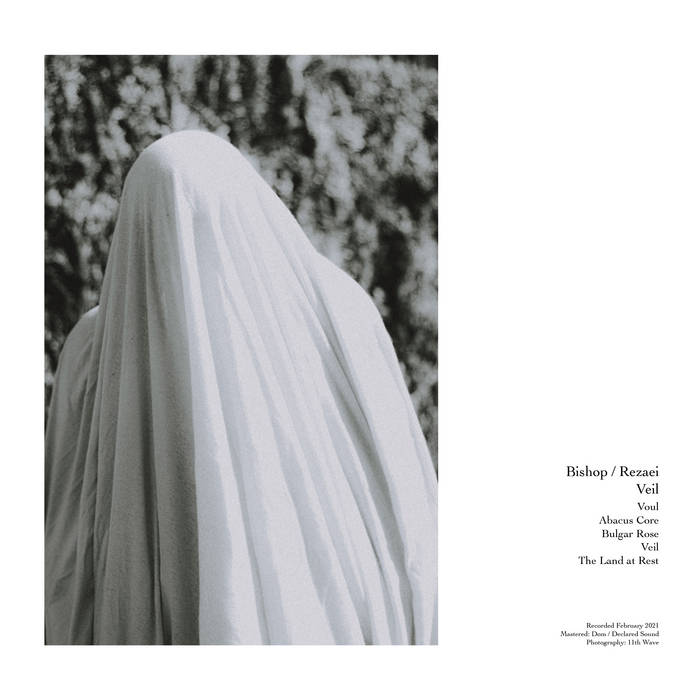 Early cinema-goers were more fascinated by the background action of dust, leaves, and crowds than what happened in the foreground, so a popular anecdote goes. Minds were blown by the camera’s ability to capture these incidental movements. Transfixed, for instance, by spooky actions of steam from a locomotive instead of whatever was happening to the train itself.

My ears follow a similar path with Stephen Bishop and Mariam Rezaei’s Veil, tracing the odd choreography of sounds within these glitching tracks. On opener ‘Voul’, an orchestra gently unravels with a stumbling gait while whirs and drones hover in the distance. Zoom out and the piece elegantly builds to a hyperactive crescendo, zoom in and there’s a universe of movements within the movement. The title track and ‘Abacus Core’ meanwhile, eschew ‘Voul’’s more linear progression, sped-up and slowed-down voices entangling with a sonic clutter that swarms rather than progresses.

Even when Veil is at its most gentle, on ‘Bulgar Rose’ and ‘The Land at Rest’, audio seems to bend as though nudged by an invisible force. Led by pianos, brass and strings, both tracks get close to a William Basinski vibe, yet retain the same restless turmoil that bristles through the rest of the album. Their somber depths giving the brain a moment to calibrate away from the tumult.

Bishop, founder of Opal Tapes and maker of brutal industrial electronics under his Basic House guise, and turntablist Rezaei created Veil via correspondence during the early weeks of 2021. Recordings of Rezaei’s tactile improvisations on turntable translated to midi and used by Bishop to bring to life samples of orchestral instruments and other audio. The result draws a line between the high end musique concrète pumped out by the GRM studio, and the warm-hearted, home-cooked absurdity spewing forth from the UK’s weird noise underground. Many of the harder edges characterising Rezaei and Bishop’s solo work are reigned in, leaving a vibrant but crumpled tapestry that seems knocked out of the regular flows of space and time.

This is another Covid-19 album then, but while so much experimental music responding to the pandemic has tended to dwell in isolation, Rezaei and Bishop defiantly bridge the social distancing gap, inscribing that process into the music itself. Sometimes, it almost sounds as though they’re making audible the latency and lag that’s become an increasingly visible part of our lives. Tellingly, Veil is released by Tusk Editions, a spin off from the Newcastle-based experimental festival as it looks for new ways of operating in a post-Covid, post-Brexit world. The album itself seems to represent that adjustment, a remarkable artefact of these strange days where we all had to find new ways of connecting.